The White Salmon River originates in the Mount Adams Wilderness. It flows for 44 miles before joining the Columbia River. The primary run is made up of exciting, accessible whitewater. If you’re in the area, and you’re a boater, we strongly recommend a visit to this section. At high flows the run is fast and big. At lower flows, the water is beautifully clear and the rapids are still exciting. This stretch is filled with consistent intermediate whitewater, capped of with Husum Falls, the highest commercially rafted waterfall in the United States. In 2011, the Condit Dam was removed, which resulted in the White Salmon River running freely from source to the Columbia River. Check out this awesome video of the demolition of the Condit Dam.

The White Salmon is a challenging run. You should be an advanced boater if you are to raft it. Wet suits or dry suits are recommended.

A permit is required and can be completed at the put-ins (self-issued).

Husum Falls is the final and hardest rapid of the Middle section. It can be scouted easily from the road, which also means there are going to be plenty of people watching you as you make the drop. If you prefer not to run the falls, walking around can be done easily.

This falls features a nasty recirculating hole that you will want to portage. Guidelines are set up on river left to help you pass. 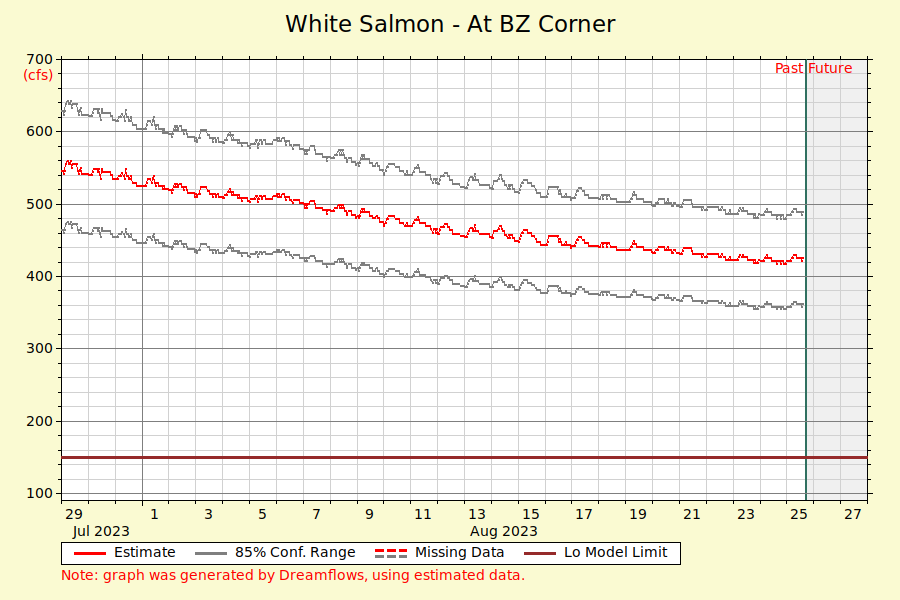 We do not have a preferred partner (yet) for the White Salmon. If you are a commercial outfitter with an excellent reputation we would love to hear from you.

WARNING: Conditions change frequently and may make this guide useless. This guide is NOT a replacement for sound judgment. Go with someone with recent White Salmon experience.

Mile 0 – BZ Corner Put In: River Right. Put-in on River Right. The Maytag Hole is the large feature in the center of the river at this Put-In. For a little extra action, you can drag your boat upstream to run the Maytag rapid. If not, put in just below this hole.

Mile 0 – Maytag: Class III. River wide hole at the Put-In. Can be avoided by putting in below this feature.

Mile 0.36 – The Cave / Shark’s Tooth: Class III. A shallow bumpy rapid pushes you to the right, but work left to avoid an undercut cave on river right.

Mile 0.65 – Siwash: Class III. Siwash is a left-of-center entrance, and blast through the center wave if you want. There is a possible surf wave at the bottom left of this rapid.

Mile 0.76 – Corkscrew: Class III. Enter right at the top of Corkscrew, then enjoy.

Mile 2.73 – Stairstep: Class III. Series of holes, dropping you down in a “Stairstep” fashion. The final drop is the biggest of these holes. Enter and stay center to avoid holes on the right of this rapid.

Mile 4.47 – Husum Falls: Class IV. Husum Falls is a 10′ drop that goes at most flows, but becomes more retentive as flows increase. The most commonly run line is to enter center right (close to the fin rock). This rapid may cause carnage, but at most flows, it is forgiving. Learn more about Husum Falls.

Mile 4.48 – Husum Falls Take-Out: River Right. Take-Out is just below Husum Falls on River Right. A Short walk back to your car parked on river right. Below this point remain a couple miles of Class II+ whitewater until you reach Northwest Lake. This section after Husum Falls is called the “Lower White Salmon”.

The “Lower” section continues on just below Husum Falls, and is considered to be beginner/intermediate.

Mile 4.48 – Husum Falls Put-In: 45.79908, -121.4858 River Right. Put-In is just below Husum Falls on River Right. There is a parking lot just upstream on river right. Below this point are a few miles of Class II+ whitewater until you reach Northwest Lake. This section after Husum Falls is called the “Lower White Salmon”.

Mile 4.6 – Rattlesnake Rapid: 45.79741, -121.48582 Class III. Your quintessential “Blow It Up” Rapid. Get momentum, and hit the wave straight.This is the hardest rapid of the Lower White salmon, and below this point are numerous scattered unnamed Class II rapids.

The “Lower Lower” section is the section below Northwest Park. The White Salmon River constricts into a very narrow gorge called “The Narrows”. Be advised there is a Class V known as Steelhead Falls, so be on your toes if you continue on past Northwest Park. This stretch takes you all the way to the confluence with the Columbia River.

Northwest Park Put-In to The Columbia River is 5.0 miles.

Mile 7.39 – Northwest Park Put-In: 45.77985, -121.51662 River Right. The Lower Lower White Salmon begins at Northwest Park.This is a cool stretch, as it takes you through the old site of the Condit Dam, which was removed in 2011. It’s mostly intermediate, but there is one Class V with an easy portage.

Mile 8.86 – Little Buck Creek Waterfall: 45.77066, -121.5378 River Right. Shortly after Put-in, a series of two small but beautiful waterfalls enter the White Salmon on river right. The first of these is Little Buck Creek, which you can park your boat under and take a quick rinse.

Mile 9.83 – Steelhead Falls: 45.75971, -121.53427 Class V. Recommended portage. The river makes a large S-turn, through a boulder garden. When the river turns back to the right, you’ll see a rocky bank on the left. The main feature to avoid is the river-wide hole just downstream of the bend. Learn more about Steelhead Falls.

Posts related to the White Salmon

White Salmon River is Online Photo by Will [...]

Our data is available for licensing. Click here to learn more.