Unique in the Western Sierra rivers, the Middle Fork of the American River is the only one where you can check “rafting through a tunnel” off of your bucket list. Also, a wonderful combination of technical whitewater, big whitewater, and beautiful scenery make this stretch of river one of the most exciting you can find. Scattered throughout this section are also artifacts of this river’s mining history, as well as artifacts related to the history with the native population.

This guide outlines the most commonly run section of the Middle Fork of the American River. Keep in mind that many of the rapids have a number of different names. If you feel like we should update or add a name, please let us know.

The Middle Fork of the American has some of the best whitewater of the numerous Forks of the American River. This area is filled with history, with the region sparking the California Gold Rush in the mid-1800s. In their quest for gold, miners heavily impacted the Middle Fork, most notably with the boring of a tunnel with dynamite to divert the river away from a sand bar. This resulted in the creation of the infamous Tunnel Chute Rapid, which careens through a narrow chute, then through a 90 foot tunnel through the mountainside. Throughout this river, keep your eyes peeled for remnants of this river’s mining past.

This river is typically done as a one day trip, however, overnights are possible.

Camping is permitted as long as you have a Wilderness Permit, are camping within the allowed dates of October 16th to June 31st, and finally, you are camping on public land and not on private property. These permits are available at Auburn SRA Ranger Station, 501 El Dorado Street in Auburn. Information on Wilderness Permits can be found here.

The Middle Fork of the American is an intermediate to advanced river run. The run starts off with a Class III out of the gate, followed quickly by the notorious Class IV+ Tunnel Chute, so you’ll want to be an experienced boater. As always, keep your eyes peeled for tree hazards, such as strainers, as well as sieves and undercut rocks. Like most Sierra rivers, the Middle Fork of the American is rife with boulders. Ruck-a-Chucky Falls is considered a Class VI mandatory portage – be ready to portage this rapid.

Permits are not required for private boaters on the Middle Fork of the American.

Unfortunately, there aren’t any shuttle services for the Middle Fork of the American, so you’ll have to set your own shuttle. However, the roads to the access points are in relatively nice condition (for river standards). It’s about a one hour drive from the Put-In to the Take-Out, and you are able to leave a car at the Ruck-a-Chucky campsite overnight if you’re running a multi-day trip.

Ruck-a-Chucky Falls is a mandatory portage. Some boaters choose to ghost boat their equipment down, but there are obvious consequences to this. Portage/Scout is on river right, and you’ll want to take a look at this ~30 foot drop full of nightmarish sieves.

The Middle Fork of the American River is typically run between 800-2500 CFS. Flows outside of this range are considered to be very difficult. 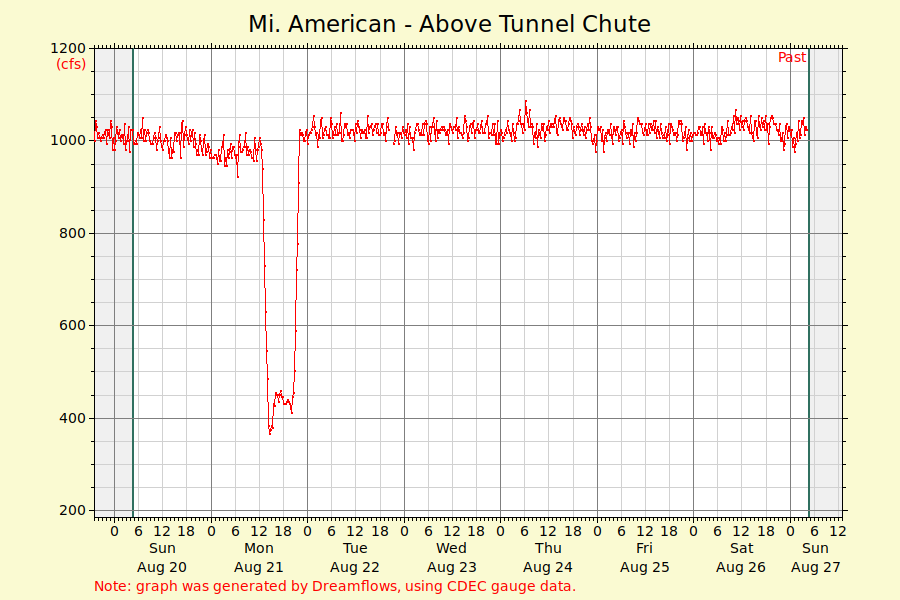 WARNING: Conditions change frequently and may make this guide useless. This guide is NOT a replacement for sound judgment, experience, or skill level.

Used at the various Put-Ins & Take-Outs
throughout this stretch

These include creeks, side hikes and historical markers.

The Middle Fork of the American River has one main Put-In at Indian Bar, and several take-outs downstream, however the most common is from Indian Bar to Greenwood Bridge.

Mile 0.03 – Alarm Clock/Good Morning: Class III. Quickly after the Put-In, Alarm Clock appears, and can give you trouble if you’re not on your toes. The river bends left, so enter left to avoid a bummer start to your day.

Mile 0.85 – Carl’s Crash/Guide Slammer: Class III. There is a big wave at the top of this rapid, runnable at most flows but hold on. There is a tongue to the left of this wave if you want to stay dry.

Mile 1.33 – Last Chance: Class III. Run Last Chance down the middle, watch out for holes on the left side. Be ready to eddy out immediately on river right to scout Tunnel Chute Rapid.

Mile 1.39 – Tunnel Chute: Class IV. The entrance to this narrow rapid is Class II. This chute can be tricky, as the current is swift and pushes you towards the right wall. Work to stay off the wall. Just below the Chute is the tunnel itself. Recommended scout on the right side. Learn more about Tunnel Chute Rapid.

Mile 1.89 – Soul Train/Berry Picker: Class II. Enter far right on this rapid, which will bring you into the branches on the right side. This is better than getting stuck on the rocks on river left, especially at lower water.

Mile 2.17 – Old Gold Tunnel: River Left. Just after Berry Picker rapid, you’ll see an old mining tunnel that was used for mining Gold in the 1800s. This is another reminder of the region’s mining past.

Mile 2.84 – Cache Rock Camp: River Left. This is a smaller camp located on river left just above a small rapid.

Mile 3.02 – Bus Crash: Class III. Sharp left bend in the river with all current pushing into a flip wall on river right. Work left to avoid flipping off this rock.

Mile 3.96 – Kanaka Falls: Class IV. Enter boulder-ridden Kanaka Falls rapid left of center. Be especially wary of 2 boulders awaiting at the bottom of this rapid on river right. Watch out for a hole in the center of the channel. In general, stay left. Can be scouted on river left.

Mile 4.11 – Surf Ledge Hole: River Left. Just below Kanaka Falls on River left is a fun Surf Ledge. Below this point is mostly Class II-III whitewater until arriving to Chunder Rapid, which is a Class IV just about Ruck-a-Chucky Falls.

Mile 7.6 – Camp 1: River Right. This camp is located on river right. It’s also a popular stop as there is a composting toilet located here.

Mile 10.73 – Camp 3: River Right. This is the final camp on the river that includes a composting toilet.

Mile 13.47 – Chunder: Class IV. This rapid is all about the entrance. There are numerous boulders just above water level, as you come to the crux of this rapid, thread the needle through two large boulders center right, then work left to stay away from large boulder on river right. Below this rapid is another sleeper rock to be avoided in the center channel.

Mile 13.62 – Cleavage: Class IV. There is a large hole on river right, and a pour over on river left form this quick Class IV rapid. The stronger hole is on the right side. Find the line in between these features (left of center). Fun surf wave at lower flows. Becomes river-wide hole at higher flows.

Mile 13.69 – Parallel Parking: Class IV. Parallel Parking is a technical rapid. There is a narrow chute just to the left of a large boulder in the center of the current. Work hard left to avoid flipping off this rock. After passing this rock, there is another wave just downstream.

Mile 14.15 – Texas Chainsaw Mama: Class IV. Texas Chainsaw Mama is another technical rapid, with the main focus being to avoid the house-sized boulders in the center of the channel. After passing the first of these boulders, work hard left to avoid the second boulder, and enter the left channel. This rapid gets its name after the undercut rock on river left.

Mile 14.48 – Pop Quiz: Class III. Somewhat similar to Texas Chainsaw Mama, large boulders in the center of the channel force you left, but there’s a lot room. This is the last rapid in this section.

Mile 15.16 – Greenwood Bridge / Drivers Flat Take-Out: River Right. This is the most commonly used take-out for this section. Downstream are a few scattered Class IIs & IIIs if you want some cool-down rapids.

Mile 21.97 – Mammoth Bar Take Out: River Right. Very important to take out here to avoid Murderer’s Bar Rapid (Class V+) downstream. This is a mandatory portage rapid, so it’s easiest just to take out at Mammoth Bar. Take-out is on river right

Posts related to the American River

Middle Fork of the American River is Online [...]

New river: South Fork of the American added to database